If you’ve been seeing boomerangs of your friends running through colorful streamers, wading through a sea of yellow balls, or coloring on a wall with a human-sized green marker, chances are that they visited the Color Factory in San Francisco!

The Color Factory is a pop-up interactive exhibit that opened in early August. Prior to its opening, news and talk of the exhibit was kept to a minimum. It wasn’t until a day or two until beforehand that I started to see news coverage, posts from lifestyle influencers, and even Facebook ads for the factory appear. Hype in the Bay Area travels fast, because tickets sold out not too soon after. They extended their stay throughout September, which sold out as well.

What exactly is an interactive exhibit? Here are some deets from my visit!

-A Willy Wonka-esqe Welcome: The exhibit kicks off with a room with walls covered in scratch-n-sniff pads inspired by their associated colors. The pads are actually are very strongly scented.

WARNING: Do NOT smell the green one named “trimester” or one of the last ones named “fry and cry”. I literally gagged and teared up. If curiosity is going to kill the cat, at least just take a very very very small contained whiff from a distance. At the end of the room is a conveyer belt with macaroon sandwiches!

-Charcoal Lemonade: This was oddly reminiscent of the Museum of Ice Cream. Taking a cue from the latest health craze, a sample of charcoal lemonade is offered here. It was pretty good and not peculiar at all.

-Orange Room: This room is an art gallery of orange themed items. Perhaps collected over many spaces across the span of time, these orange objects range from your earliest childhood days to traffic cones plucked from the street.

-Light Bright Disco Party: Dozens of dazzling disco balls hang above you here. Down the hall is life-sized Light Bright, where you can arrange giant plastic tubes on the wall.

-Blue Balloon Planet: This room feels like something out of a Sci-Fi film, as it’s completely lined with giant blue balloons of different sizes. It takes some work to navigate throughout the room as you can’t escape the blues. -DoodleBob’s Liar: These walls are pages ripped from the giant coloring book of your dreams! There are two giant green markers in the room, but coloring the wall is actually pretty hard.

-Rainbow: Find the forest of rainbow ribbons here! Be careful though, you’ll never know whose lying inside…

-Down Below and Up Above: You’ll need to head up across a stairway shrouded in deep red with a neon smilie face glaring at you. After you cross the red sea, there’s a deep hallway descending in every color.

-Selfie Room: This room is pretty self-explanatory. The floor is completely covered in selfies, which are being spat from a computer that is constantly printing more selfies.

-Confetti Rain: Probably the second most famous room of the exhibit, colorful confetti is continuously raining from the ceiling and piling over the floor like autumn leaves. There’s so much confetti here, you can scoop them up like snow and throw them all over your friends or yourself.

Warning: You will probably have secret confetti streams stuck to your skin and hiding in your clothing no matter how much you pat yourself off.

-Infinite Yellow Ball Pit: Saving the best for last. This room is a giant pool filled to the brim with yellow balls. Apparently, the pit is filled with over 200,000 balls, and was pretty deep. I think it was about 3-4” deep, and I’m a few inches over 5” so I was actually a little afraid of being swallowed in the sea. I felt like I experienced a childhood memory that I never had before (I was never allowed to play in ball pits because they’re “filthy”). At the end, you receive a yellow hued ice cream before exiting the factory! 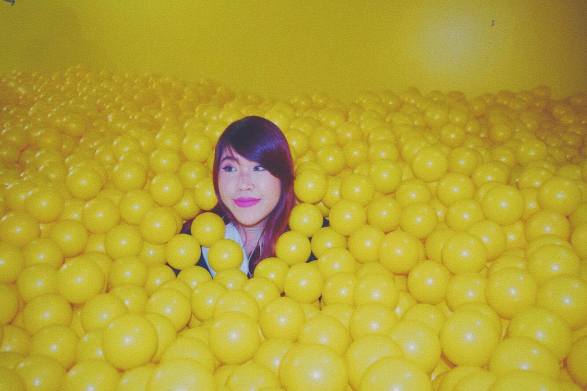 Although tickets were a bit hefty at $32 a person, the Color Factory was a lot of fun with lots to do and see!

Hopefully if you don’t have tickets yet, check their website for updates!